Roof Types and the importance within Design

in It is in the Detail
alison noble, architectural blog

We all know that roofs are an integral part of a house and probably one of the most important elements.  Roofs keep us dry from the rain and snow, shade us from the sweltering sun and block us from the unyielding wind.  Usually roof forms are dictated by technical, economic and aesthetic considerations. Did you know that there are more than a dozen basic roof types and even more combinations of those?  I’m just going to touch on a few of the more popular basic forms for homes:

Flat:  Flat roofs are just that, flat.  They are typically used where the climate is arid and drainage is of secondary importance. They are a very popular roof type for warehouses, commercial spaces, office buildings and often residential structures.

Shed:  This is the first category of many sloped roof types that I will be discussing. The shed, sometimes referred to as “lean to” or “mono-pitched” contains only one pitch.  You can think of it as a flat roof that has been tilted slightly.  It is often used on just a portion of a home.  The shed roof is usually used in combination with other roof forms to create a home with interesting rooflines. 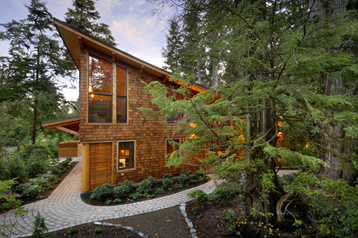 Gable:  A roof with two slopes that form an “A” or triangle is called a gable roof. This type of roof is very common on North American homes.  The gable roof can contain roof pitches that are very shallow to ones that are extremely steep.  Also, numerous gable roofs can be placed together at perpendicular angles to cover a home with many wings. 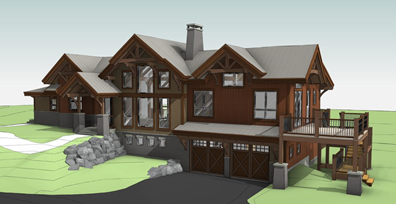 Clerestory:  A clerestory roof is one that combines both a gable and shed roof.  A clerestory usually contains a higher gable roof that sits atop a short wall with a shed roof below.  This allows for windows to be placed within the short wall for light within the interior of a large space.

Hip:  A roof that starts with a gable shape but has a sloped end instead of a vertical wall is called a hipped roof.  The hipped roof slopes upward from all four sides of a structure, having no vertical ends. This type of roof is very common in residential designs.

Gambrel:  A gambrel roof is a type of gable roof with two slopes on each side, the upper being less steep than the lower. This roof form is very common in barn designs.

Mansard: This type of roof is a hipped gambrel roof, thus having two slopes on every side. It can provide extra attic space or other rooms without having to build an entire additional floor.

Pyramid: As the name suggests, this type of roof is shaped like a pyramid.  This kind of roof is usually on a small portion of a house or on small structures such as a garage or pool house. 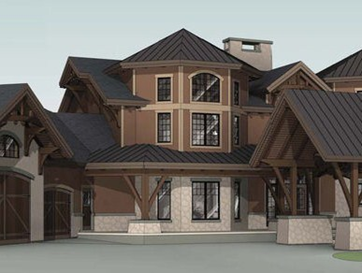 So there you have it, the basic roof types of residential construction.  To design a visually stimulating house, a few different roof types may be used together or several of the same forms may be utilized in different ways.  This creates a home that uniquely responds to both its interior function and its exterior individuality.

Download our Photo ebook & get ready to be inspired!